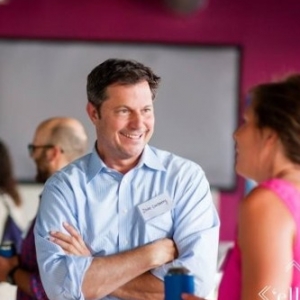 The digital ad agency launched a new subsidiary for its location-based technology.

As we heard during Baltimore Innovation Week’s Creative & Media Day, new methods are helping advertisers reach consumers in a way that’s location-based and tailored to an audience.

“People want to spread word and get their message out differently and sometimes they just don’t know how to do it,” said David Carberry, CEO of Baltimore-based Enradius.

Specializing in geo-targeting, Enradius grew an advertising and marketing agency that helps businesses to reach potential customers with mobile ads based on their location. Think of it like a bumper sticker, except coming to a phone.

Now the company is adding government buildings to the areas where it can get the word out, a move that’s bringing a focus on advocacy.

This fall, Enradius is launching a subsidiary, called GovReach, to grow the portion of its business that specifically reaches government agencies. Along with businesses that want to get the word out, such as government contractors, the idea is to spread messages to decision makers and even voters.

Carberry said the new branch has “agendas in mind.” For instance, GovReach worked with a campaign to raise awareness about opioid addiction that could reach people who visit a county health department.

In another case, an association that works with government employees ran a campaign to raise awareness about benefits they could receive at a specific time.

GovReach can also work with political campaigns that may be seeking a new way to reach voters in certain areas.

Carberry said the technology relies on GPS within a device, and GovReach can map where clicks are coming from. There’s also new opportunity to see how well an ad worked. He said that the data doesn’t include who is clicking, only where it came from.

The service is available nationally. But being a place with lots of government buildings, Carberry said D.C. is a place where GovReach is focusing on growth: Enradius recently opened an office at a WeWork in the District.